What are overreaching and overtraining?

Overtraining is a phrase commonly used in competitive sport. True overtraining syndrome is actually quite rare, but the spectrum of conditions that come under the umbrella of unexplained underperformance syndrome can affect athletes more frequently. There are three main subsets of this syndrome.

Non-functional overreaching occurs when periods of intense training are not followed by sufficient rest or recovery. This leads to a longer performance decrement, which is still reversible with full recovery after rest, but this takes longer and there is not the positive effect on performance due to accompanying symptoms and loss of training time. Symptoms include psychological effects such as fatigue or low motivation and/or hormonal disturbance. Non-functional overreaching symptoms and recovery last from weeks to months.

True overtraining syndrome is similar to non-functional overreaching but with a longer performance decrement (>2 months) and more severe symptoms (psychological, neurological, endocrine, immunological). Given that the only real measurable difference between non-functional overreaching and overtraining is the amount of time that it takes to recover, it makes it extremely difficult to differentiate or diagnose between the two at the time, and most diagnoses are made in retrospect.
(1)

Several confounding factors such as inadequate nutrition (energy and/or carbohydrate intake), illness, psychosocial stressors (work, team, coach, and family related), and sleep disorders may be present and can affect whether an athlete is able to recover effectively and work in the functional overreaching category, or if the training stress is too high for them at that time, pushing them into non-functional or overtraining.

In a study of thirteen competitive swimmers who completed ten days of intensified training at the same volume and relative intensity, seven successfully completed the required training regimen. Three had difficulty completing the training requirements with significantly higher levels of mood disturbance, and the other three swimmers were so severely affected by the training that they had to be dropped from the study.
(2)

This demonstrates the importance of the coach-athlete relationship, and the need to adapt training to an individual athlete.

How do we diagnose them?

In association with a decrease in performance.
(3)

Another approach that is useful in identifying possible cases of overreaching or overtraining syndrome is to identify potential triggers in athletes.

The European and American Colleges of Sports Medicine have a useful checklist to assist the diagnosis of overtraining syndrome. 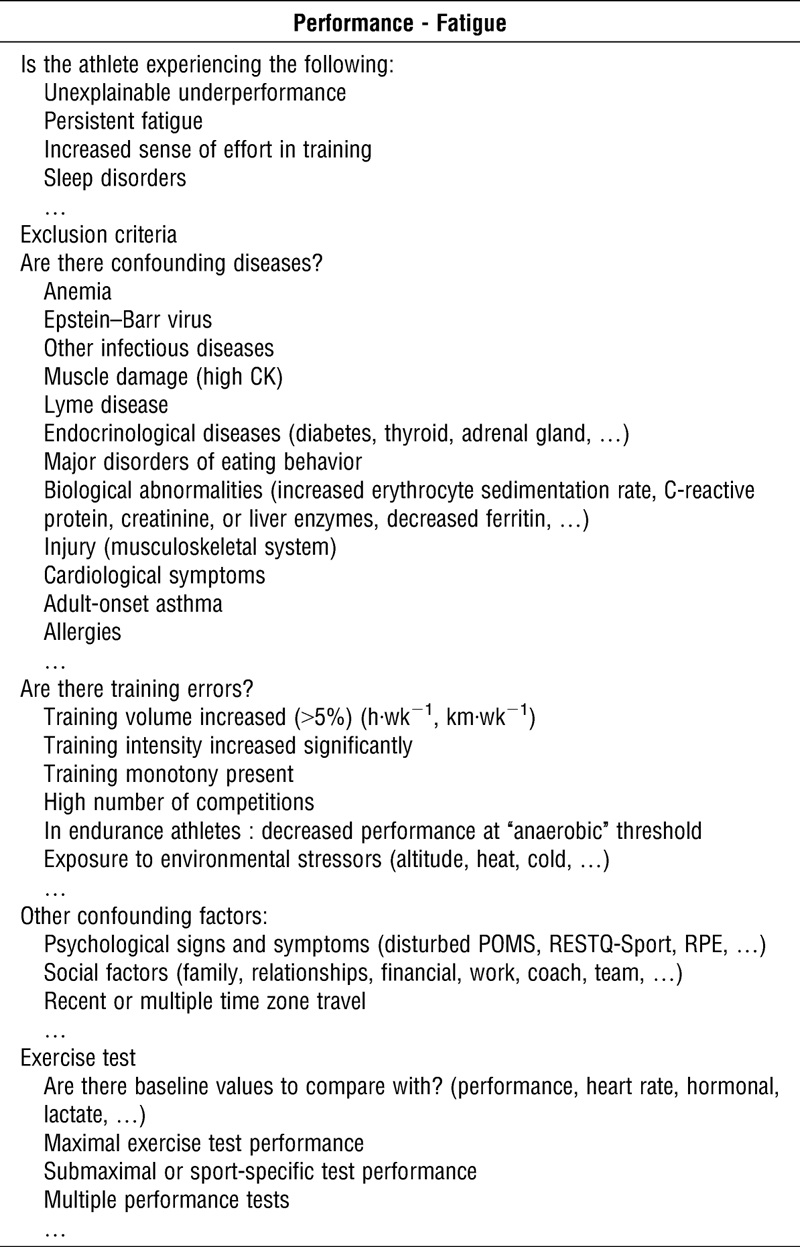 How common are they?

The exact biochemical cause of overtraining syndrome is not well understood. It is thought that the triggers above lead to changes within the body, causing imbalances in a number of different systems and substances, including cytokines, neurotransmitters and hormones. There is no single test or substance that has been found to be reliably measurable to aid in diagnosis.

True overtraining syndrome – and even non-functional overreaching – is debilitating and it takes a substantial time for recovery to occur. Rest and very light training seem to be the only treatment available. Therefore it is extremely important to focus on the prevention of these conditions.

How can we prevent overtraining syndrome?

What is the role of nutrition?

In a group of runners who ran 16 to 21 km daily for 7 days, performance dropped significantly when a moderate carbohydrate intake of 5.5g/kg body mass per day was maintained, with symptoms indicating that they were overreached. When the daily carbohydrate intake was increased to 8.5g/kg, the drops in performance were much smaller, and overreaching symptoms were reduced. Recovery from this week of hard training was more complete with the high carbohydrate treatment. (7)

A group of well-trained cyclists were required to perform 8 days of intensive endurance training. On one occasion, subjects consumed a 2% carbohydrate solution before, during, and after training (low carb), and on the other occasion, subjects consumed a 6.4% carbohydrate solution before and during training and a 20% carbohydrate solution after training (high carb). Total carbohydrate intake was 6.4g/kg body mass per day with low carb and 9.4g/kg with high carb. The intensified training protocol induced overreaching in both as indicated by a decrease in performance, but the decrease in performance was significantly less with high carb. Alteration of mood states and hormonal disturbances in response to exercise were also less on high carb compared with low carb.

Additional carbohydrates should not be at the expense of reduced protein intake as there is some evidence that insufficient protein can also result in an increased risk of overtraining. Dehydration and negative energy balance can increase the stress response, therefore also increasing the risk of overtraining.

The key takeaway points are that during periods of intense training such as training camps, high carbohydrate intake (8-9g/kg/day), adequate fluids and an even or positive energy balance should be prioritised.

Overreaching can play a useful part in improving athletic performance, but it is a fine balance to avoid non-functional overreaching or overtraining. The importance of the balance between training and recovery cannot be overstated. As a coach or an athlete, there are interventions that can be implemented to avoid this balance tipping the wrong way, including individualisation and periodisation of training, adequate sleep, targeted nutrition and understanding of the stressors outside of training.